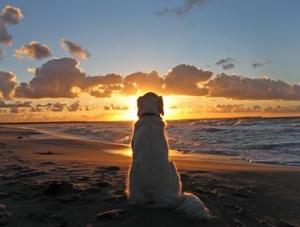 Molly, my Portuguese Water Dog can’t jump into my van through the window anymore. And she used to answer the phone by picking up the receiver in her mouth and then ceremoniously drop it in the waste basket across the room when she heard the cue, “it’s a bill collector.” She can’t see the phone anymore. She still likes to hold carrots between her paws and will happily chew away but because her teeth aren’t what they used to be, the chewing takes a while longer. Still, she jumps on the bed with ease when it’s time to sleep (often landing on one of my other dogs already lying there), and she still had all her circuits firing as she learned to navigate her way back into the house from the yard when I moved into a new house. It took her three weeks, but blind or not, she doggedly persevered until she memorized the new layout. Not bad for a dog who is 16 years old.

Of the 400 or so clients I see annually, I have a special soft spot for older dogs, the more mature generation, that is, dogs over 5 years of age. More and more, people are opening their hearts and realizing the joy of adopting older dogs. Bill, for example, was a client who, in 1999 told me, “I’m looking for a dog I can spend my final years with without having to worry about housetraining, jumping and puppy problems.” He adopted a 7 year old Golden Retriever from a rescue here in L.A., at the age of 78. I’m happy to report both he and his dog Thunder were blessed with six years of true friendship. He and Thunder passed away last year within six months of each other.

The number one concern people have about adopting older dogs has to do with “taking on someone else’s problems.” Many people reason that an older dog wouldn’t be in a shelter or rescue if he or she didn’t have behavioral problems. But you would be amazed at what people consider behavioral problems. “My dog pokes people in their private parts whenever they come in and it’s very embarrassing,” one person said. “My dog scratches on the door to come in the house but I don’t want the dog in my house,” said another. “My dog jumps on people.” “My dog sheds.” My dog doesn’t do what I say.” But the number one reason people turn in dogs to shelters is, “we’re moving and the new location doesn’t allow dogs.”

When it comes to behavioral problems, think of this: puppies have a long list of behavioral issues every new adopter has to deal with. So why not opt for the experienced mature dog who has already solved many of life’s puzzles, especially the intricacies and foibles of the human species? The benefits are numerous.

Caring for older dogs is no harder than raising and caring for puppies. In many cases it’s much easier. Other than extreme health cases, the cost of caring for older dogs isn’t any more than a younger dog either. The key to maintaining your mature dog’s health is the same as for all dogs: noticing subtle changes in behavior. Most of the following conditions could have a myriad of factors influencing the symptoms, so make sure you keep in close contact with your veterinarian.

-Is your dog limping or does she seem to be favoring one leg or side of her body? Older dogs can suffer a bit from arthritis. There are many products on the market to help reduce inflammation and keep the joints fluid. My dogs thrive on the chondroitin/glucasamine tablets.

-Is your dog not eating? Have his teeth checked. Make sure there are no infections in the groin area.

-Obesity can creep in as dogs age so you may have to adjust the diet a bit. You might reduce the amount food during meals and add a few more vegetables so your dog feels full. Maintain a safe exercise and walking regimen.

Older dogs can “roll with the punches” of life so to speak because they already have a wealth of experience to draw from. That doesn’t mean that the transition into a new home isn’t stressful however. This is true whether you are bringing an older dog into your home or bringing a younger dog into a home where the mature dog already lives. If you already have another dog in the family, or a cat, be considerate of their feelings also. And once again, err on the side of safety. Set up your environment so that toys and food are strictly supervised. Protect everybody. I just received a call from a woman who was feeling bad that the new dog she adopted, a 3 year old Corgi, was harassing her 13 year old Labrador. She thought getting another dog would help her older dog live a little longer by stimulating more activity and providing a little companionship. These are terrific ideas and often dogs will develop a happy relationship. But it takes time and sometimes the chemistry never develops between the dogs. If that’s the case, it becomes more stressful for the older dog. Please support your older dog and if he doesn’t want to interact, restrict the freedom of the other dog and train him and give him something else to keep him busy.

If you have children in the family, make sure they don’t overwhelm the dog with too much affection or too much play. Set up a safety zone for your dog, such as the corner of a room, under a table, a kennel or even a bed. Instruct the children to leave the dog alone whenever he’s in his personal space. NOTE: Many newly adopted dogs are on their best behavior for the first 30 days. A dog who has shown no aggressive tendencies previously around food, territory or while being touched, especially while sleeping, may begin to display a more sensitive attitude. Always err on the side of safety, especially when children are involved. Call a professional trainer if you notice any signs of aggression, no matter how young or old the dog is.

There is a special feeling that comes with adopting a mature dog. Puppies are adopted quickly from most rescues but shelters are overflowing with older dogs. It’s rewarding beyond words to know you saved the life of a dog who was dealt a tough hand. As one client told me, who adopted a five year old Boxer, “I adopted her a year after my husband died. I thought it was time to get a dog again because we raised them early in our marriage and I thought I could do it on my own now. When I got her, I thought I was saving her. But she has taught me patience and she been a wonderful companion. I think she saved me.”

*Six months after this article was written, my beloved Molly passed away. Her eulogy can be found here.