Help with an Aggressive Dog

Here is a recent email I received from a distraught lady in South Africa (published with her permission) about her beautiful but aggressive dog, Axel. It’s pretty lengthy but because it highlights issues that many trainers deal with throughout the year, I am publishing it with my response in its entirety.  It’s always difficult to provide help from a distance but there are usually certain suggestions that can help people get started in the right direction.

I realize that you are probably a very busy man, but I’m desperate, so please forgive my boldness in sending you this message. This really is an S.O.S, Mr Owens, because we have NO idea what to do about our aggressive dog, Axel. 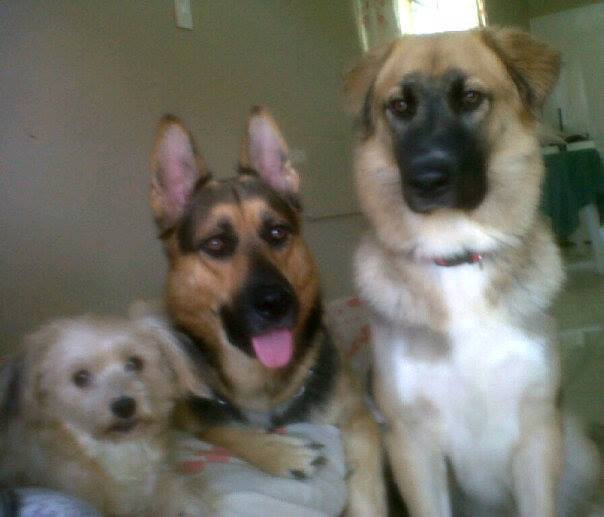 Axel (center in this photo) is about 1-and-a-half. His mother was a German Shepherd, and his father a Siberian Husky. Both healthy, both well-looked after. Axel is from the 2nd litter.

The Problem: From the very night that we brought Axel home at 7 weeks (too early, I know, but very common, especially here in South Africa), he NEVER behaved like a puppy. He never chewed stuff, he didn’t play with toys, he was utterly terrified beyond ALL reason whenever he went for walks. He never guarded property, he never showed any protectiveness, he didn’t do any of the things puppies usually do.

Obviously, this concerned us, but even more concerning is the fact that Axel seems to be an aggressive dog without any reason – which obviously isn’t the case. For instance, he’ll come over to me, nudge at my hand, indicating he wants to be patted. I’ll comply and all will be fine. If I speak to him, say his name, or whatever, he will stop panting, lick his lips, avert his eyes, and growl. He then moves away from me as soon as he can, growling all the while. At other times, he’ll be sitting somewhere, I’ll talk to him, and the same thing happens. Lip licking, averted eyes, head turned away, growling…he’ll move elsewhere as well.

The thing is, Mr Owens, at other times he’ll be too sweet for words. He’s still scared of things we see no reason for him to fear, but he isn’t as bad as he used to be.

But there is a little more to this story, if you will be so kind as to bear with me…?

When Axel was 11 months of age, we moved 900+ miles away, to another part of the country. Axel had to remain with a “friend” of mine. The arrangement was temporary. We had every intention of sending for him as soon as we were able to do so. Over the next 5 months, my friend told me Axel had settled in with her and her family, that they truly loved him and he loved them, and she told me she would prefer to keep him. She made it sound as though Axel had truly blossomed on her farm and in her care, that he was blissfully happy. Then, just when we’d managed to finally accept leaving him with her (since we wanted to do what was right for him), she told me there’d been an “incident” at the farm. A day old calf had been attacked, and Axel was suspect number 1. I found that difficult to believe, because Axel has always LOVED other animals, and never showed any inclination to harm any of the ones he’d met while with us. She insisted that she didn’t believe it was him either.

The calf was treated and left in her garden, with its mother, for the weekend, to give the little one time to heal before joining the rest of the cows, bulls, and calves. But Axel apparently wanted to get to the calf. According to my friend, when the cow tried to stop him, he pulled her away by one of her horns and then lay down beside the calf. He started licking at the wounds. Someone told my friend it was good that he was doing that, and that he should be left alone.

I don’t know how much time elapsed, but according to my friend, when she went to check on the 3 of them (the cow, calf, and Axel), he’d licked the wounds SO BADLY that the damage was extensive. She said he just wouldn’t stop licking! He also allegedly chewed off one of the calf’s ears as well. Through it all the calf didn’t make a sound, she said. The calf was taken to the vet, but Axel had done SO MUCH damage that it was hopeless. The calf was destroyed.

My friend told me she couldn’t bear the idea of Axel being cooped up in a Suburban yard after knowing so much freedom on the farm, therefore, if we didn’t want him back, she was going to have him put down. She said she’d rather know he was at peace and buried in her garden “where he had a good innings”, than let him spend the rest of his years in some suburban back yard.

Of course, we flew into action! Her story about Axel and the calf didn’t ring true, and we were absolutely not going to let our boy, our problematic, scared, confused boy, be KILLED! My husband moved mountains and eventually Axel was put on a plane and came to us. This happened in mid-January.

Upon his arrival we were stunned! He was skin and bone! Bones jutted out everywhere! My friend told me that he’d lost weight because of the medication the calf had been on, and which he’d ingested, when he’d licked at the wounds. Initially, she said he had weighed 40kgs, but when he boarded the plane to come here, he weighed 28.4. So in a week he’d lost nearly 12kgs. Again, it didn’t ring true. He also had diarrhea, another side-effect of the calf’s medication, she said. She said he only ate human food, and that he’d been on a VERY healthy diet. Yet, aside from being so thin, his fur was hard and coarse, it was falling out, and his skin was flaky and dry.

She told me he was mad on her, her shadow, and that he’d probably pine. He didn’t. And he eats dog food most of the time.

Since being with us, he’s put on weight and now weighs 39.4kgs. His fur is thick, luxurious, soft, and isn’t falling out. His skin is no longer flaking and dry. He looks like the picture of perfect health, just like our other 2 fur-babies. But the growling is STILL there. It hasn’t gone.

Whereas our other German Shepherd cross Irish Wolfhound (or so we were told), is all full of the joys of life, and absolutely LOVES and ADORES love and affection, Axel is basically a loner. He keeps to himself. Every now and then he comes to my hubby or me for cuddles, but it nearly always ends in growls. Especially around me, although my husband isn’t immune, either.

Mr Owens, we don’t know what else to do. We have tried everything we can to make Axel feel safe, secure, and loved. We didn’t abandon him. We put ourselves in debt to get him back. Our commitment to him is total! He is our big, beautiful, perfect boy, but we are troubled nonetheless. We are deeply concerned that one day he WILL bite, or worse, attack! More than the injuries, it would break my heart! We love him dearly, Mr Owens. We so want him to have a happy life, like our other 2. We want him to be happy, to feel loved, cherished, valued, appreciated, and precious. Our dogs mean the world to us, and Axel does, too, despite all the problems. We don’t want to lose him, but lately we’re starting to discuss possibly putting him down, which to us, seems like the ultimate betrayal!

He has a clean bill of health from the vet. We spend time with him. I’m with him ALL day. We’ve tried training him…he learns fast…but nothing, I repeat, NOTHING works!

A dog behaviour professional we know has given up on him now. She raised her hands, shook her head and said: “Mrs David – I don’t know what to do!”

So, Mr Owens…can you offer ANY advice? Can you help us save Axel in any way?

I apologize for such a long message! But it’s like I said, we love Axel and we don’t want to give up on him, so I will even message a total stranger, write a long message to the stranger, and solicit his help if there is the slightest chance it will benefit our boy.

Thank you for taking the time to read through all of this!

And my response. Hopefully this will help others out there who find themselves dealing with aggressive dog issues.

Thank you for writing. What an incredibly difficult situation. I so appreciate your efforts in trying to help Axel. You obviously have a deep connection with him and I believe this, along with your affection is the foundation for any progress. And thank you for sending the beautiful picture.

Without being able to see Axel, it would be impossible for me or any other professional to accurately evaluate him and offer any kind of comprehensive behavior modification program. Further, a complete work up would be required that would include information on his diet, previous training methods, daily routine, where he sleeps, structured play and exercise and more. That being said, I can give you an overview of what needs to be done and some suggestions as to how to proceed.

First and foremost is the health issue. Have him thoroughly examined. The examination would not only include his overall physical health: eyes, ears, teeth, spinal alignment, muscle and joint health, no parasites, ticks, fleas, and so on, but also a blood test should be done. Make sure all the blood chemistry is normal and there are no problems related to thyroid, liver, and anything else.

To help you understand a little more as to what could be influencing Axel’s temperament and behavior, here is a brief overview: the three things that affect temperament and behavior are genetics (what the grandparents and parents pass along), the socialization period (up to approximately 12-14 weeks of age), and how the dog is raised and his everyday environment. Obviously, he’s had a tough go of it but that doesn’t mean he can’t be helped. A dog’s progress if dramatically affected by the combination of compassion (heart) and training skills (science) of his caretakers, family and friends. With you he may just have that chance.