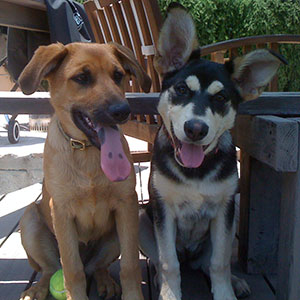 Dog Parks. What a great idea! Imagine being able to take your buddy to a big, open field and letting him or her safely play and run around with dozens of other dogs. What a great way to provide exercise, especially for those rambunctious, high-energy teenagers that often become destructive and “self-employed” at home when they have nothing else to do. How many of us have come home to torn sofa cushions, shredded plants, neighbors complaining about incessant barking, etc.?

Dog parks can provide a wonderful opportunity for your dog to learn appropriate dog-to-dog behavior with dogs of all ages, sizes and temperaments. In addition to all these benefits, dog parks often offer us humans a chance to get out of the house and spend some time socializing and meeting new friends.

Most people who take their dogs to dog parks are respectful, polite, responsible, and look out not only for their own dog, but for other people’s dogs as well. After all, if one dog gets hurt, everyone is affected. And most dog parks are well maintained, clean and safe. With so many benefits to taking your dog to a dog park, are there any disadvantages?

Not a month goes by that I don’t hear from one of my clients that his dog or his neighbor’s dog was hurt at a dog park. And in 99% of the cases, it all had to do with the attitude of the human. A well-known actor (this is L.A. after-all) brought two of his dogs to a park and as soon as the dogs entered, they zeroed in on a Lab who was resting underneath a picnic table. Within seconds, cries and growls filled the air. People rushed to help the Lab who sustained multiple puncture wounds. When the actor finally arrived at the scene, he simply declared, “Hey, dogs are dogs, they were only playing.”

On another occasion, a woman came directly from a rescue with her new 80 lb dog and wanted to see how he would behave around other dogs. The dog attacked a small, blind Pekinese and caused several thousands of dollars in medical care.

In other cases, dogs are hurt because of how they play: some dogs are much more physical than others, resulting in unintentional injuries. Others never learned appropriate dog etiquette because of the lack of proper socialization when they were young. As a result, their pushy behavior often results in misunderstandings that trigger fights.

In addition, not every dog likes to visit dog parks. Older dogs sometimes care less about being around other dogs and are perfectly content interacting only with their humans. Well-intentioned as some people are, they can facilitate problems because they fail to read their dog’s body language, which is telling them, “Get me out of here!”

So what should you look for? Visit a park before you bring your dog. Talk to people. Safe parks all have one thing in common: a good park is one where people will not put up with aggressive dogs and they look out for one another. Make sure there is a separate area for small dogs. How clean is the park? Is water available? If you find yourself stepping over mounds of feces, it’s a good bet that park isn’t for you and your dog. See if the park has a ranger that oversees activities. This is rare but really says a lot about safety.

Once you’ve chosen a dog park, don’t bring food or your dog’s favorite toys as that often causes problems. Notice how other dogs are behaving and if play becomes to rowdy, interrupt it before a problem arises. If your dog seems fearful, leave the park.

Know your dog. If your dog displays aggression or fearfulness, don’t take your dog to a dog park. You can work on behavioral problems with a trainer but in the meantime, you can take your dog for walks or jogs, play fetch, hide-and-go seek and “find-it.”

There are wonderful dog parks out there that benefit both people and dogs. To find them, do a little investigation, use your good common sense, be responsible and keep a watchful eye. You and your dog can have a lot of fun!