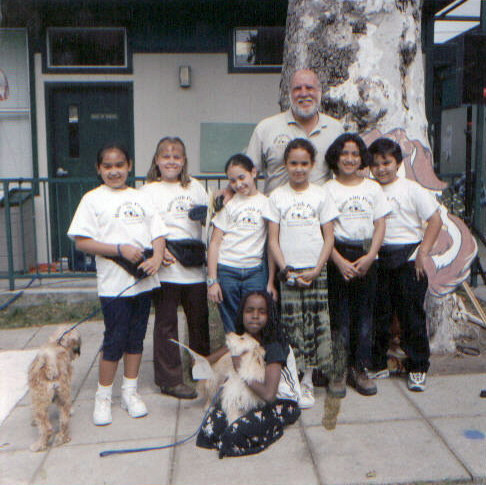 A group of happy Paws for Peace trainers!

This year I’m celebrating my 40th Anniversary of doing what I love as a
professional dog trainer. Throughout the year I’ll be reminiscing about
some of the most awesome experiences I’ve had. Here’s to celebrating the
joy of dogs!

Paws for Peace was an after-school violence prevention program in the
90’s and early 2000’s designed for elementary school children and based
on the premise that how we treat our dogs is directly related to how
treat ourselves, our families and our friends. Through Paws for Peace,
children were taught the important connection of treating friends,
family, and the environment with the same kindness and respect that we
show to animals.

During my time working on the program, there was one little girl I
remember in particular. Her story has stuck with me and think it always
will.

There were 10 students in class, all considered “at-risk.” Some were
diagnosed with attention deficit disorder and on medication, most lived
in poverty, in dangerous neighborhoods, and a few, like Melissa*, lived
with an aunt or grandmother rather than parents.

Melissa was in the 4th grade. When she first walked into class, I was
struck how drawn and colorless her face was. She walked with a kind of
vacant stare, always looking out of the corner of her dark eyes and
never looking you in the face. She didn’t smile. If you approached her
or reached out to touch her arm, she would quickly withdraw and back
away. The teachers hoped our animal-assisted therapy program, Paws for
Peace, might allow her to reach out to the world a little more.

The first day of class was held without dogs, to explain the program to
the children and distribute handouts. On the second day of class, the
children were introduced to their dogs. Most dogs were rescues from the
Glendale Humane Society in California. Melissa’s dog was a
five-month-old Whippet named Devo.

At first Melissa didn’t know what to make of the jumping, barking bundle
of energy, but with a lot of gentle encouragement, she hesitantly
reached out and began to pet him. Just like the training process with
dogs, we let Melissa proceed at her own comfortable speed and by the end
of the next day Melissa was sitting on the ground allowing Devo to jump
onto her lap and off again.

All through week two, most of the children in class progressed rapidly.
Two decided they weren’t really interested in the responsibilities of
feeding and cleaning up poop and by week three, they were gone. But
Melissa never missed a class. The children had the dogs sitting and
lying down, staying in place and going to their beds. They learned they
could get their dogs to do all of these things without having to hit,
kick, shock, shake, or jerk them on a leash. They trained and groomed
their dogs with kindness and affection. They listened to their dog’s
heartbeat through a stethoscope when a guest veterinarian visited and
learned all about keeping dogs healthy.

The high point of each class, however, was the daily walk. The children
were taught how to hold the leash, have their dog sit before crossing
the street (it was a low traffic cul-de-sac), and while walking,
occasionally ask their dog to come when called. But children being
children and dogs being dogs, every walk inevitably turned into a run.
Seeing ears flapping, tails wagging and children joyously yelling while
running down the hill after their dogs summed up the Paws for Peace
program perfectly. For some of these children, Paws for Peace provides
rare opportunities for them to actually be children. They can have fun
in a safe environment.

Now Melissa hadn’t seen or spoken with her mother for many months
because she was incarcerated, and, as a result, Melissa lived with her
grandmother. Parents, guardians, and teachers are always invited to
watch the classes. And there, at the end of the third week of classes, a
woman appeared and stood and briefly watched the class from a few yards
away. It was Melissa’s mother.

While I was instructing another student, the mother walked straight up
to Melissa, who was seated on the ground with Devo. I couldn’t hear what
she said but Melissa started to cry and the mother walked away. My
assistant instructor, Stacy, put her arms around the sobbing little girl
and held her. Stacy gave me a sign and the two of them left class for a
walk. A few minutes later they returned and Melissa went back to petting
little Devo. Stacy signaled everything was OK and class continued.

After class, I made a point to praise Melissa for her courage and
bravery, and she allowed me to give her a little hug. When the children
had all left, Stacy related what had happened. Melissa’s mother never
said hello or acknowledged her. She had walked up to this sweet little
girl and said, ” I think your dog is ugly.” Then she left.

Little Melissa was heartbroken. I asked Stacy what she said to console
her. She said, “I didn’t really know what to say. So I asked her if she
thought Devo was beautiful. She nodded her head yes. Then I asked her if
she loved Devo. She managed to whisper a yes. So I said, “ it really
doesn’t matter what other people think sometimes. All that’s important
is that you think Devo is beautiful and that you love him….and Devo
loves you.”

My heart was in my throat and I smiled and thanked Stacy profusely. She
was perfect.

From that day on, Melissa volunteered to clean up after class and to
walk the dogs to the cars. At graduation, this shy, wonderful little
girl got up in front of forty people and showed them what she had
learned in class. She asked Devo to sit, lie down, come when called and
stay. And Devo did it all. When she finished, Melissa knelt down to hug
Devo and give him a treat. And the smile never left her face. For a
moment there was silence and then everyone applauded and cheered. We all
had tears in our eyes.

It is for children like Melissa that the Paws for Peace program was
created. One-by-one, with the help of animals, each child learns about
his or her own self-worth. They learn that there are other ways to get
along with family, friends, and the environment — ways that can replace
fear, anger, and frustration. They learn the value of practicing
empathy, treating themselves and others with respect, and that kindness
and compassion work.