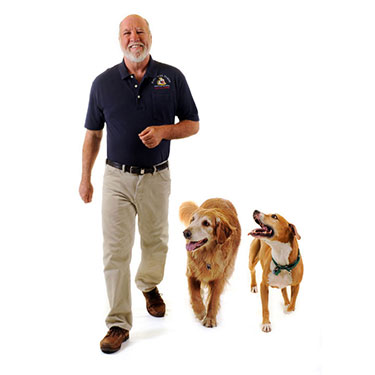 Paul, often referred to as the “original” Dog Whisperer, has been training dogs for over 45 years and is one of the world’s leading proponents of positive, force-free, nonviolent animal training.

His books and DVDs have been translated into several languages and have sold over 600,000 units worldwide. His message of kindness and compassion in dog training has reached more than 5 million people around the world through his products, articles, classes, seminars, and television and print interviews.

He produced and is featured on three Dog Whisperer DVDs, Volumes One and Two and the 2016 DVD release of Welcome Home! The Ultimate Guide for all Newly Adopted Puppies & Dogs.

In 2015, Paul was named one of among the first of 27 dog training professionals in the world to earn the title of Professional Canine Trainer-accredited through the Pet Professional Accreditation Board. In 2019, he was recognized as one of the 10 Top Dog Trainers in the United States by Topdogtips.com.

Paul’s programs are unique in that stress management methods for humans are presented as part of the classes. Paul is the founder/director of the children’s after-sch