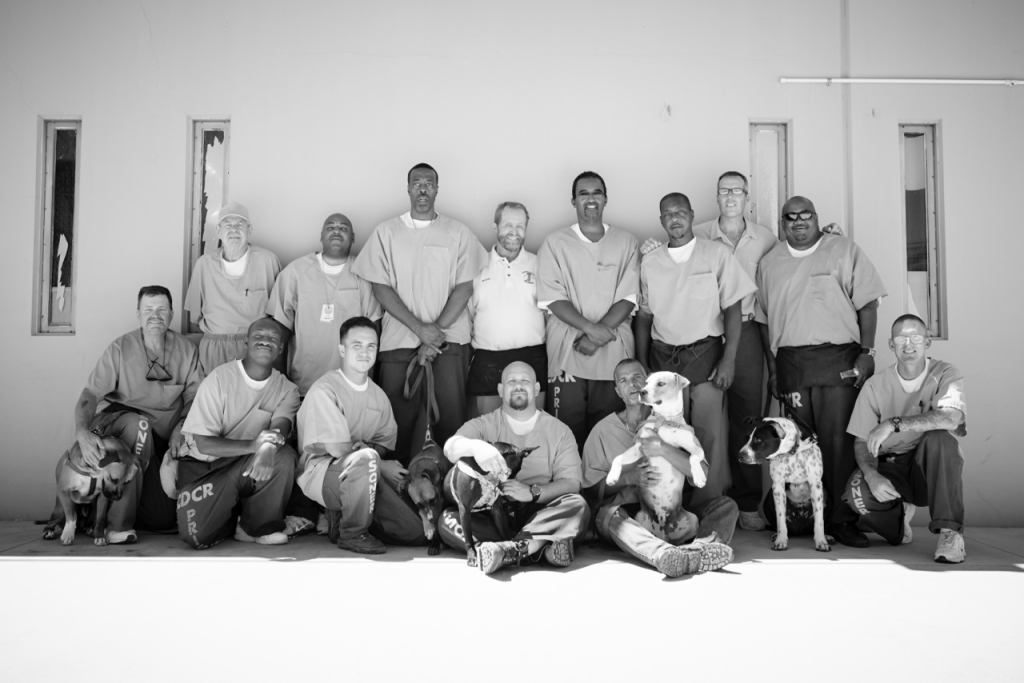 Prison is different from jail. I spent a three-day, Easter vacation in jail in my early twenties for a youthful recreational offense, but prison is different. There’s an ever-present, over-the-shoulder watchfulness and palpable sense of vulnerability. The stone walls and iron bars define the hardness that is felt the moment you enter and the doors lock behind you.

Last month, I and two of my Teacher Trainees, Rachel Heald and Glenda Herrin were invited to attend a canine prison program taught by my good friend, professional dog trainer Mark Tipton, director of Angeldogs Training in Santa Clarita, California. The program was initiated by an obviously very caring individual, Captain Crystal Wood of the State of California’s Department of Corrections and Rehabilitation. It was sponsored by Karma Dog Rescue, a terrific non-profit organization that saves at-risk dogs from high-kill Los Angeles area shelters.

This new twelve-week program consisted of five rescued dogs and fourteen prisoners who ranged in age from mid-twenties to over sixty. Almost all of these men were sentenced to life without possibility of parole. Obviously, the dogs didn’t know this.

Classes were held three days a week for sessions of up to an hour. Mark held two weeks worth of preparation classes before any participants were introduced to their dogs. He talked about learning theory, body language, handling, care and training.

Participants accepted responsibility for the care, safety and training of the dogs. The dogs lived with five primary trainers during the day and slept in protected outdoor kennels at night. The benefits for the dogs were to not only save them from euthanization, but to help improve their quality of life by providing them with physical, mental and emotional stimulation through socialization and training. The stated behavioral goal: have each dog pass the AKC Canine Good Citizenship Test. The goal for the men: respect, responsibility, stress reduction and improved self worth. It could be summed up with what Mark tells the program participants: “The way we treat animals is directly linked to how we treat ourselves and others.”

I was introduced to each of the men while they entered the large auditorium. They were very polite and there was a genuine sense of warmth and “we’re happy to meet you.” While I was talking with them, it reminded me of something a good friend told me some 40 years ago: “Sometimes you’ll be in a situation where you’ll feel like you’re the actor, and the director and a member of the audience, all at the same time. That’s present-moment awareness.” I can honestly say, at that moment, I was uniquely aware of the situation. But when the dogs entered, heads turned and everything seemed to kind of wake up and come alive. The atmosphere seemed, well, suddenly lighter and less threatening. 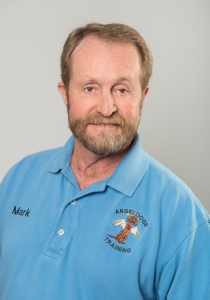 After a few moments, Mark gathered everyone together and class began. Under his expert guidance, I watched these men ask their dogs to sit, lie down, stay, come and leave treats when thrown on the floor. They asked them to heel, each dog staying by their trainer’s side while being walked across the auditorium. You could see how Mark’s curriculum was expertly set up to step-by-step prepare both handler and dog for the CGC test.

Both the dogs’ and the handlers’ responses were nothing short of amazing. These were happy dogs. These were happier men. In five short weeks, using strictly positive training methods, the men had learned to be responsible for their dogs and treat them with kindness and respect. I saw them work together in teams without confrontation and without competition. Their training skills were beyond what I could imagine in such a short period of time. These guys were good dog trainers.

After the class, I congratulated each one of them on their work. I asked one of the men what the prison program had meant to him and he said, “You know, I was surprised. I’ve been here so long I didn’t think it was possible, but I feel,” and he hesitated a moment, and then said, “bigger.” I said, “like your heart expanded?” And he lit up and said, “Yeah!”

Later, Captain Wood told us a story. She explained that, on any given day, there could be several hundred prisoners in the courtyard. She said that over time, each and every guard learned that whenever the yard became quiet, tensions would rise because something bad was about to happen. Everyone would then be on highest alert. One day recently that’s exactly what happened. Things became quiet and all the guards came to attention, looking for signs of trouble. What was happening? It turns out that Mark and his trainers had come outside to get their pictures taken with their dogs. Every prisoner in the yard stopped what they were doing. They simply wanted to see the dogs. The Captain said she had never seen anything like that in her more than 20 years working in the prison system.

I want to list every one of their names so that they can have one more affirmation that what they are doing is making a difference and a meaningful and wonderful contribution to the world. Further, I cannot express deeply enough the admiration I have for the job Mark is doing and what he and his students have accomplished. Heartiest congratulations to Karma Rescue for their indefatigable efforts in helping “create a compassionate society which provides safety, refuge and protection for all animals.” And kudos to Captain Wood and her staff for their professionalism, guidance and compassion. This program represents the very best of what the canine-human bond has to offer.

Good job one and all!

Graduation day is set for Saturday, Aug 9. I’ll let you know how everyone did.